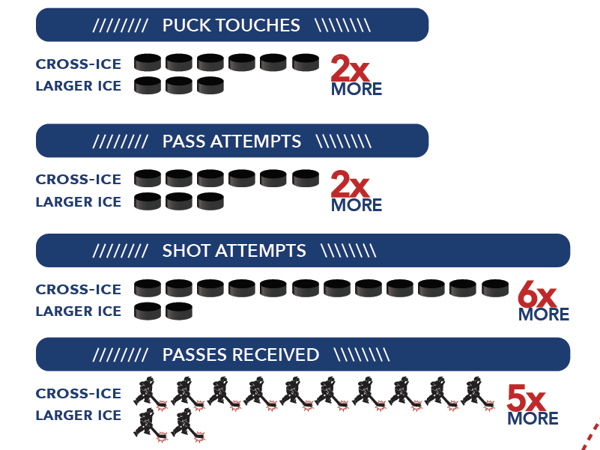 The Lynn Youth Hockey Learn to Play Hockey (LTP) is a skills program designed to introduce the game of hockey to young players who have completed at least 1 year of a L2S program. Players will be divided into groups based upon age, size, previous hockey training (if any) and present abilities. Our goal is to introduce each player to the game of hockey, in a positive and enjoyable learning environment, ensuring they will not only learn the fundamentals of the game, but will have a great time doing it!

To help address these questions, let's think about a child trying to skate with a puck while performing a drill from one end of the rink to the other, how long will this take? How much energy will this require? Will the player's decision-making skills be enhanced more in the close action of the smaller cross-ice surface or in the wide-open area of the full-ice surface? In which situation will the child be more involved in the action?

A study of hockey games played on the full-ice surface by George Kingston in 1976 found the following:

In a sixty-minute running time hockey game between 6-8 year old children, the average player had possession of the puck for 20.7 seconds. Top National Hockey League and international professional players were also timed and no player exceeded 85 seconds of puck possession time. In a sixty-minute children's game the actual playing time of the game was 20 minutes and 38 seconds. Taking this into consideration, the individual player is only on the ice every third or fourth shift depending on how many players are on the team, resulting in even less ice time. An average of less than 0.5 shots per game
for youth players and only 1.5 shots per game for junior and professional players.

The study concluded that:

· For young players in the "full-ice game model" of development, the youngest players would require 180 games and the older youth players would require 80 games to enjoy 60 minutes of actual puck possession time to execute their stick handling, passing, pass receiving and shooting skills.

Many players never touched the puck in the game, especially in youth hockey.

USA Hockey firmly believes that by giving children the opportunity to participate in the Cross-Ice hockey program, which supports cross-ice practicing and playing, that their enjoyment of hockey as well as their hockey skills will be greatly enhanced.

To help you further understand the benefits of the cross-ice practicing and playing model, some of the advantages are listed below.

· The children have more energy with which they can improve their skills when they are skating 85 feet across the ice surface as opposed to the 200 feet length of the ice surface.

· The close feeling of belonging to a team will motivate a child to participate with even greater enthusiasm.

· Drills designed according to the varying skill level of players within the group are easier to organize.

· More repetition/frequency in drills in one ice session.

· Decision-making skills are enhanced, as more decisions must be made more

frequently at a higher tempo.

· Playing on a smaller rink results in increased puck possession time for each player.

· Line changes are made quickly since the players are directly beside the playing surface.

· Scoring skills are enhanced since the players have more shooting opportunities.

· The goalkeeper's reading of the game and reaction to changing game situations become more effective.

· The game is full of continuously changing situations.

· The speed in playing situations increase, which will require quicker mental and physical reactions by the players.

· Due to increased tempo, all of the team members take part in solving the playing situations, which leads to a sharing of responsibilities between players.

· The feeling of being an important part of the action increases because of the small size of the rink.

· Hockey sense, or understanding the principles of the game, is being developed at a young age.

· There are no unnecessary breaks in the game (i.e. off-sides, icing).

· More efficient use of ice time and space.

· USA Hockey recommends that teams play with two or three units of four or five players and one goalkeeper, which results in each player having more ice time.

· More ice time for practicing and playing is made available to more teams within a single association.

· Many teams can practice together by sharing the ice surface.

GENERAL SPIRIT OF PARTICIPATION AND FUN

· More children get a chance to play ice hockey.

· More children will experience a feeling of success when playing hockey.

· The same exciting and fun environment as in a "real" game is created.

· More and less gifted children will benefit from close/tight action on the ice.

· Children are excited and motivated to continue playing hockey.

· Hockey will be more appealing and rewarding to a wider range of children and their parents.

Please have your skater ready to be on the ice by 11:30am.